We asked ANYTIMES CEO why she recommends Cacoo to startups

Meet CEO Chika Tsunoda, president and creator of ANYTIMES, a skill sharing service startup. When her company was first starting out, it was new to the world of IT. Cacoo played a significant role in the launch of ANYTIMES’s services. We asked Ms. Tsunoda just how beneficial Cacoo was for the creation of ANYTIMES.

First of all, Ms. Tsunoda, can you tell us a bit about your work?

I am working at the startup ANYTIMES, which offers a service where individuals can share their skills. This skill-sharing service matches people who are wanting to have small everyday tasks taken care of, such as housework, pet care, or set up a conversational companion for an elderly person, with people who want to tap into their personal talents interests and work in their free time.

Through our web service, you are able to chat and take care of payments. It has become a system where everything from the matching of clients to job seekers, job offers, and the payment can all can be completed within the web service platform.

In this view of the ANYTIMES interface, the left side lists the different tasks available with the details of the highlighted task on the right. This particular task is looking for someone to clean a studio apartment for ¥5050.

How did you learn about Cacoo?

When we first started the business, we didn’t know much about IT, and without knowing how to make the product, we went to a systems company with a 50-page powerpoint of a plan we had created that outlined what we wanted to do. However, that initially did not go over well. They told us to create a wireframe of the product for them. We then searched the internet for “wireframe,” discovered Cacoo, and decided to give it a try.

What was your impression when you first tried it out?

From the beginning, we did not know what the word “wireframe” meant, however, because the UI and template designs were easy to read and the tutorials were easy to understand we were able to use it relatively smoothly.

What kind of concrete things have you created with Cacoo?

Because the ANYTIMES service began with the website, we used Cacoo to create the wireframes and screen transitions. We had about 50 to 100 pages, I think, but my partner and I created everything.

ANYTIMES used Cacoo to create this wireframe for their website and service.

When you first used Cacoo, what was the most convenient part for you?

Before we started using Cacoo, without a wireframe, all we had was a business plan. It was important that we communicated what we wanted to make, so with the creation of the wireframe, we reached out about this work to the people at the systems company and to the freelance engineers (who we found via crowd-sourcing) and through Cacoo we were able to tell them what we wanted to make, and immediately communication became smooth.

Do you have a favorite feature or way to use Cacoo?

The comment feature was great, really easy to understand. Not only the comment feature, but there was also the chat feature and the ability to edit together in real time, so we used all of the tools together and were able to communicate efficiently. My partner and I used Cacoo and thanks to these features we were able to collaborate and the work moved forward quickly.

We were also able to use Cacoo as the base of our communication with the engineers who later joined in, and because of this, I believe the comment feature and the communication tools are great. 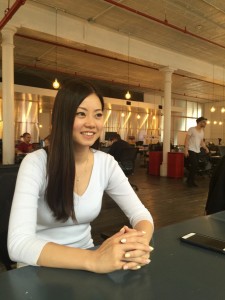 ANYTIMES CEO, Chika Tsunoda, believes that Cacoo is a very convenient service for IT novices interested in starting a new service platform.

Who would you recommend Cacoo to?

Actually, I’ve already introduced it to 5 or 6 people. The people I introduced it to, they are all people who want to start a business and who want to start up a service. When you start a service, creating a wireframe is essential. In addition, it is essential to consolidate the wireframes created by your team members. Beginners to Cacoo were able to use it without hassle. Because Cacoo offers tools that make collaboration easy such as chat and comment and the ability to communicate through real-time editing, new users were able to use Cacoo with ease. Many people who want to start a new service are surprisingly new to the tech field, and because of this, I think that Cacoo is a very useful tool for them.

Lastly, please share with us any suggestions or requests that you may have for Cacoo.

I think it would be great if you could use this not only from computers, but if you could also check it anywhere from your cell phones, which would enable the ability to instantly edit and comment, and give immediate feedback.