Make your next project workflow smoother by conducting a Starfish Retrospective

Did you know that a starfish, or Asteroidea as it’s scientifically known, has no brain, no blood, and on average has five arms? That’s where the Starfish Retrospective, with five categories to fill in, derives its name. Fortunately, all participating have a brain when conducting this retrospective.

If your team is looking for a more detailed option to review a recently completed iteration, consider the Starfish Retrospective. The ‘Starfish Exercise,’ as it’s also known, may be exactly what you’re looking for.

Overview of the Starfish Retrospective

As opposed to other classic retrospectives (such as the “Mad Sad Glad Retrospective,’ the ‘Start Stop Continue Retrospective,’ or the ‘Keep Problem Try Retrospective’) the starfish exercise allows you to consider more courses of action to move forward with. 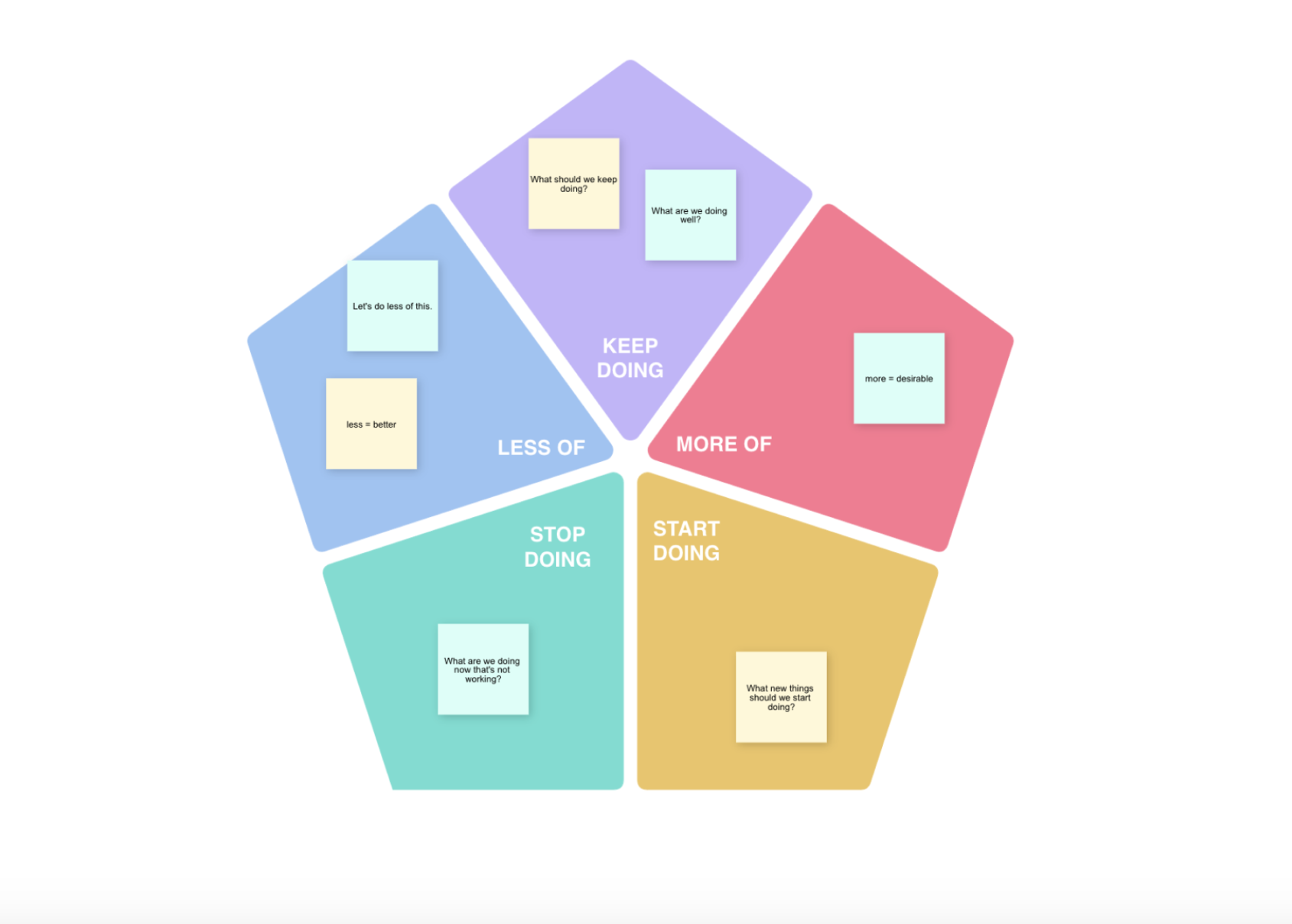 As already mentioned, the Starfish Retrospective consists of five categories, making a shape that resembles the faceless sea creature. Those five categories are:

Use a dry erase board with sticky notes in person or our Cacoo online retrospective template to get started collaborating with your team and editing in real-time. With an hour, you’ll have a solid idea of changes to smooth out workflows for your next iteration.

Before holding your retrospective meeting, either online or in-person, you need to inform your team with plenty of time. Give them guidelines for the meeting and allow them ample time to brainstorm for each of the categories.

When holding the meeting, you can choose what order to address the categories as it makes sense for your team. However, it’s most common to go through them in the order listed above. It can be beneficial to start with more negative aspects of projects to make way for more positive outlooks and excitement about implementing helpful changes. But you will also need to take a bit of extra time with the final step of ‘start.’ After going over it, you’ll make a plan or assign a specific employee to implement the changes.

To start with, you’ll go around the room and allow everyone to share the ideas they came up with for things to completely STOP doing moving forward. This could be steps of the project that turned out to be entirely useless or that cost more money than they’re worth.

Give everyone a chance to talk and discuss the different ideas brought up to come to a consensus on the issues that really should be entirely stopped. After giving the conversation around ten minutes, it’s probably a good time to move on to the next step.

This is one of the categories that really sets the Starfish Retrospective apart from other retrospective methods.

In this category, you’ll place items or ideas that don’t need to be entirely stopped, but that are maybe using up a bit too much of the budget or time that the team has to spare. You can even place some ideas here that were brought up in the ‘stop’ step that the team couldn’t reach a consensus on. By monitoring those items and productivity if they’re happening less often, you could ultimately make the decision that those actions are best left stopped and have some data to back it up.

After discussing for about another ten minutes, you should be ready to move on.

Now we’re starting to get into that more positive mindset. In this category, you should be focusing on aspects of the recent project that went perfectly. The team performed these actions without flaw. It wouldn’t benefit the project to increase or change them.

This could be QA performed or a number of team check-ins. Carrying out these steps in the project worked well, but if you were to increase their frequency, they might start to slow down the process instead.

After another ten minutes of discussing and adding items to the template, it’s time to move on to the fourth step.

This is the second category that sets the Starfish model apart. Things to do ‘more of’ are similar to the ‘keep doing’ category, but that could further improve the process by increasing frequency. This could be things like communication, frequency of QA, or whatever best fits your team’s needs.

You could even experiment with some items from the ‘keep doing’ category. There might be a possibility that you could improve the process by increasing the frequency of some actions. Once you’ve accomplished a good dialogue here, you can move onto the more complex portion of the retrospective: ‘Start doing.’

As already mentioned, this step will eat up a bit more time than the expected ten minutes from the past four steps. The ‘start’ step is where your team can really bring together their creative thinking, research, and past working experience to suggest completely new steps and ideas to bring to the process in the next iteration.

Maybe it would be effective to add a more specialized team member. Maybe there is a type of QA test that the team isn’t running that would be helpful. Or, maybe someone thinks it would be beneficial to entirely change an app or move to a different host. No idea is a bad idea when it comes to this step.

Allow as much time as necessary for every team member to be able to fully express themself. This step should encourage a lot of open dialogue. After everyone suggests all their ideas the team will narrow it down to a few options together. The options that everyone agrees on are the best to start changing in the next iteration.

While there’s probably an infinite number of good ideas, it’s not wise to change too much at once. The adjustment and confusion that could cause would more likely end up being detrimental to the team’s productivity. You can always bring back something that didn’t make the cut in the next retrospective.

After narrowing down the items to pursue, work together to create a plan of how to implement these new ideas. It might work best to assign one or two team members to be in charge of research or implementation. That way, you can make sure they receive the necessary follow-through to allow the team to succeed.

This retrospective offers more dimension than many other options available. If you think it could benefit your team and processes, it’s a great one to try out! With minimal information and preparation to get started for the first time, it’s a no-brainer (just like the starfish!).

If, after a few run-throughs, you and your team agree that the Starfish Retrospective isn’t the most helpful, or you’re just wanting to try something different, Cacoo offers a number of different retrospective templates to help you make the most of each project. You can also find a quick guide to six types of retrospectives to learn more and help decide which option will be right for your team.

Try it out and see how it works with your next project!

Collaborate on ideas to align your team's vision in Cacoo
RELATED: Learn from each project with a Mad Sad Glad retrospective

Lauren Grabau Lauren Grabau is a globetrotting copywriter providing SEO web content, puns, and a keen eye for spelling wherever she can. She's probably currently planning her next trip or lost on a long walk.