What is rapid prototyping, and how can it help you? 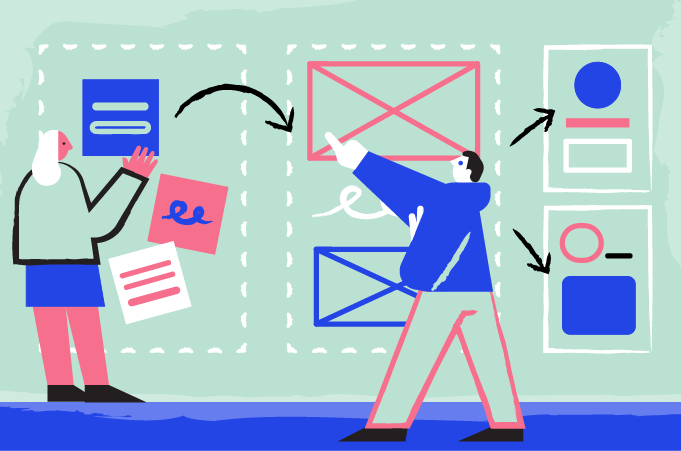 If there are two things clients love, it’s work delivered on time and under budget. Surprises, deadline extensions, and requests for more money are a surefire way to spoil an otherwise mutually beneficial relationship. Rapid prototyping is an iterative design process that can help you avoid these scenarios.

By creating a simplified version of the design and involving your client or manager in the development stages early on, you reduce the chances of disappointment or misalignment. Plus, it saves you from facing a nail-biting (and potentially expensive) reveal later on.

What is rapid prototyping?

In a nutshell, rapid prototyping is a three-stage design process that consists of ideation, prototype development, and testing. Prototypes begin with a limited number of features or designs and progressively become more functional. Stakeholders are involved early and often, and changes are made swiftly.

Rapid prototyping works in much the same way as a Minimum Viable Product, or MVP for short. With an MVP, you release a barebones version of a product to gauge an audience’s reaction. In this case, you’re releasing that MVP to your client.

To keep the process fast and cost-efficient, designers start by creating low-fidelity (lo-fi) prototypes. Lo-fi models contain the simplest amount of detail necessary to convey an idea. Once designers begin refining the product direction, they move on to medium- and high-fidelity prototypes with more detail.

Depending on the industry, designers use the following methods of rapid prototyping.

What are the benefits of rapid prototyping?

As you’ve probably gathered, time and money are two biggies. But aside from the obvious two, there are plenty of additional benefits to the rapid prototyping technique.

Rapid prototyping takes away much of the surprise element when it comes to presenting your work to the client or your boss. And when it comes to big, expensive projects, that’s a good thing.

Involving stakeholders throughout the development stage means you get input as you work, which raises your chances of creating something you know they’ll love. It’s good for their pocket, but it’s also good for your working relationship.

With rapid prototyping, you don’t just save on time that would otherwise be spent fixing something that doesn’t work. It’s also a more efficient way of working in general.

Although stopping to hear feedback sounds slower than plowing on ahead, gathering input as you go can help you make the right decisions more quickly.

For example, a designer who gathers information about a website’s user experience (UX) at every stage will be able to reach an approved design far quicker than someone who completes the entire thing in one shot and then revises again and again. Think of it this way: every bit of feedback you gather is like a signpost leading you towards the finish line.

When a lot is resting on a decision — and you’re not sure whether it’s the right one — you may experience a bout of analysis paralysis.

It’s much easier to make changes to something with more minor detail — and that’s the opportunity rapid prototyping provides. Because you’re working with a simpler version, there’s less information clouding your judgment.

You also have more input from the client, which makes it easier to prioritize in the first place.

Rapid prototyping involves regular communication with a wide range of people — from stakeholders to senior management. Working closely together promotes collaboration and sets the tone for a positive rapport between team members and between the team and stakeholders. It also creates a feeling of shared ownership of the project, which improves focus and motivation among everyone involved.

Rapid prototyping can feel daunting if you’ve never done it before. Here are some best practices to help you get started and stay on track.

There’s a famous Silicon Valley mantra that goes, “fail fast, fail often.” While there’s a lot to be said for careful planning, when it comes to rapid prototyping, it’s better to make like the Silicon Valley crowd and hit the ground running.

Start by getting everyone to brainstorm as many ideas as possible. It doesn’t matter if they’re outrageous or half-baked at this stage: the goal is to unleash creativity. You can refine, test, and trim everything down later on.

Top tip: Stuck for ideas? The Lotus Blossom technique can help get the ball rolling (and help you refine your output).

The goal is never to prototype the entire product — only the most crucial aspects of the functionality you want to demonstrate. With this in mind, don’t allow your design phases to stretch on for too long. Otherwise, the process will become less focused and more expensive, defeating the purpose.

Clearly define the scope in the ideation phase, so your team agrees on the criteria you must meet in the development phase. A typical iteration might focus on:

Scoping is deliberately narrow in rapid prototyping, but development doesn’t always have to be linear. Your team can design multiple unrelated features simultaneously, but they should be developed and tested separately.

Collaboration is a vital part of rapid prototyping, but that doesn’t mean it’s a feedback free-for-all.

It’s time-consuming (and often not very helpful) to include the client in the first round of testing — so gradually loop in more and more senior people as you go. That way, your designers don’t receive an influx of convoluted and conflicting information, and you don’t waste your clients’ time showing them irrelevant work.

For example, if you were building a new house, you’d show the prospective buyers how it’s coming along once the walls were up and the rooms partitioned. You wouldn’t invite them to look at anything before this point, such as the foundations.

At that point, they can’t picture how to use the product, nor do they have the technical know-how to offer useful feedback. You’d be better off checking in with the lead engineer or site manager instead. Or, in your case: with your team and boss.

As you’ve probably deduced, the more collaborative this process is, the better. And if there’s one thing clients love (aside from a project that’s on time and under budget), it’s tools that are easy to use.

When you’re creating your prototypes, such as a wireframe, mock it up on cloud-based software with tools such as real-time collaborative editing and comment features. That way, it’s easy for you and your team to work together in real-time and for your stakeholders to leave feedback right on your designs.

With Cacoo, our diagramming tool, you can collaborate with other users in real-time and leave feedback right on diagrams. Mention users to get their attention, and resolve comments to get them out of the way without losing them forever. Simply log in to access all the comments, diagrams, and documentation via a single, intuitive dashboard.